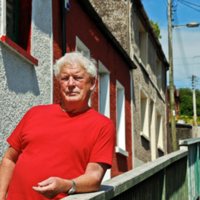 Jim (b. 1940s) remembers that his father worked for the railways and had a tied cottage in an area known as Kilbarry Cottages, or Railway Cottages. Then the family moved to Paddock House, Fairhill. The house was at the top of Washbrew Lane, and came with 2 or 3 acres.

Jim remembers the Eucharistic Procession, when the fire brigade hosed down the lane and women scrubbed the street clean. There was a well at the top of the lane called Fahy’s Well. He tells another story about a woman who called into a shop to borrow a wedding ring on her wedding day. How animals were maltreated. Boxing was a popular sport because there was no costs involved.

They played all sorts of sports and games, including “kiss and torture” and “spin the bottle”. He describes a pervasive fear of authority. He loved school and won a prize every week there. He went to school in Blackpool and appreciated his teacher, Cal Herlihy, who instilled a love of theatre and astronomy. He was very shy as a child and young adult.

He was working in the Post office, but he developed a love of theatre and became an actor and writer. Jim talks about the writing process. His love for the work of Frank O’Connor and his writing a biography of him. Working as a telegram boy for the Post Office. In the Post office you could secretly do other activities. Youghal as a holiday destination. Areas of the Northside that have changed over time.

His mother wrote and read letter for Travellers. He talks about two “shop houses” (or house shops), where a room in an ordinary house was used as a small shop for essential goods. His mother’s house shop sold “brus”, a confectionery mixture made from broken sweets.

The difficulties of learning painting; of writing and of performing.

Working life at the Post Office. Handling large sums of money, with no security.

He talks about the character of Cork and Cork people.

J M: Oh yeah, yeah, the old Mangle Field was, was, I think the Mangle Field was a huge part in my life. You know there was so many things happened there. Like it was the centre of my life, really. You know it was just a dirty old -- there was nettles at the side of it, a big hole in the middle, but we just were there day and night, whatever sport was in, rugby, cycling whatever like. The Mangle Field was huge. They would be huge. I mean all the, all the right-hand side of Gurranabraher like, which is all houses now, they were all fields. There was, opposite my house was a place called the dump. There was a flat field on top of it and then going up then in stages, tiered, there were two or three em fields which where -- everybody was playing football and hurling all the time. Now Leary’s Field is still there, that’s up further in the top of Fairhill, like the right-hand side of Churchfield, eh that’s still there, yeah. The Fairfield is there still, yeah. That, that was always there, because that’s how obviously Fairhill got its name. ‘Twas a huge hill, on up the Fairfield. Eh it’s not used that often really. The other ones would be em [pause] it’s hard to say. The only other thing with all the boxing clubs and things like that, they’re all gone now a long, long time, you know? Em, the only other thing that we missed was em, we called it Bonty’s, ‘twas kind of a big bog, boggish field. Eh where Valley Drive is now, past where my house was, there was all em plots. Em we were all given plots by the corporation, you’d have a little plot you know and you grew spuds there. ‘Twas a very -- it has come back in again now actually. And I remember on a Saturday, I would bring up a em, what they -- a gally, a billy can of tea to my father and a couple of slices of bread, and he’d be, he’d be digging the spuds or, or I’d be helping him you know. But they were all em, that’s all plot land and there was all water seeping, it’s still seeping down there, coming up along the side of the road, because that stream was coming all the way down. The stream, the same stream, well it came out where we learnt to swim and where all the rats and bottles and dead pups were, you know? It flows all the way down underneath Fairhill, down onto the Watercourse Road and out under by the, by the, by the Opera House. It comes out there and that joins up with the Watercourse Road then coming in from Blackpool. Eh with the Watercourse Road again, that’s why ‘twas named em -- that’s all completely gone now like, all Churchfield, all the right-hand side of Gurranabraher, Columcille Road, all em, all em -- I’m saying new houses, the new houses are probably there fifty years, you know? That’s all gone. There was a lot of playing fields around the place, the North Monastery is still there, I think anyway. Although I, I have a feeling those fields are gone now, they’re taken up by, by clubs like St Vincents and, and eh Maybe Father O Leary’s and em Castleview soccer team, I think they’re all taken up. ‘Cause they were belong to the North Monastery. There was maybe eight or ten hurling pitches.

J M I’ve a feeling they’re all gone, you know? So like I mean, it was, where I lived was practically out in the country. ‘Twas on the verge of the country anyway, you know when you come up to Wolfe Tone Street there, the start of Fairhill, there was fields all over the place you know that’s -- F-Fairhill ended the city if you know what I mean.