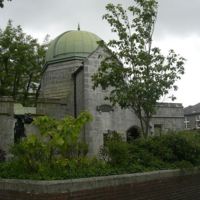 Michael talks about the Crawford Observatory building, about the instruments it housed, and about the advancement of scientific knowledge.
Michael is the curator of University College Cork. The Crawford Observatory was established on the campus in 1880. The astronomical equipment was supplied by the Dublin firm of Grubb. The university’s president, William Kirby Sullivan built links with the city’s business class, and William Crawford paid for the Grubb telescope. The observatory was used to teach students until 1914.He discusses the role of philanthropy in funding projects.
He comments on the creation of electricity by the Cork Tramway Company, and how when the company was shut down in 1929 there was a campaign by Alfred O’Rahilly and Eoin The Pope O’Mahony to get compensation for the tram workers.
He tells a story about the installation of a seismograph, which had to be moved after it was found that bus traffic nearby was giving false readings.
He explains how the site for the observatory was originally chosen.

This interview was conducted for the DVD If the Walls Could Talk.

If the Wall Could Talk: Stories Of Cork's Heritage Catalogue Numbers:

If the Stones Could Speak: More stories from Cork's heritage (2015) DVD

M W Yeah, okay. One very, very, very last one that’s just occurred to me here, the actual position of the observatory on the campus?
M H First of all you have to remember that the original campus was a lot smaller than what we now call Main Campus. And in fact Main Campus is a much, what we call Main Campus is only part of a much bigger patchwork now which extends right into you know the city centre in quite a few directions. So in the past, the university gradually starting from the small patch of ground, quite a large patch of ground, strictly speaking in its time, when Queen’s College Cork opened in 1849, a piece of ground and it built the main building on it and subsequently began to build, became the medical building but it gradually began to acquire lands around that perimeter to bring them out to what are the boundaries of Main Quad now; Western Road, Donovan’s Road, Gaol Walk and College Road. And this was one of the sites that they picked up on so there was a piece of flat ground up towards the, up beside the county Gaol and the Quarry, beside us, what was originally a lime kiln and a stone quarry beside it. And William Kirby Sullivan in picking off this land, decided it was a good place for the observatory to go, and you can’t see this piece of land without seeing it literally as a piece of higher ground with no buildings around it, all the streetscape, all the buildings around it, that are university buildings and all the streetscape beyond it, all absent, green fields, do you know flat ground so not only was there no light pollution to interfere with, to interfere with the astronomers, there was no heat pollution ‘cause rising heat causes waves that distort the view. That’s why they want, that’s why astronomers want to put astro-physicists, want to put instruments in space because of all that heat wobble of the visible light and also there were no buildings to interfere with the line of sight of the telescopes. So when they can, you know brought the view through into 360 and right down to the, to the environment, right down to the, right down to the horizon line, it was a low horizon so they had quite a long view, it was a good place.
M W Okay.
M H But as Queens College Cork grew and became U.C.C, and began erecting buildings on green around, it began to block out the view, and obviously interfere with the use of the telescope. So really you know by the First World War, the telescope was hemmed in.

If the Walls Could Talk: Stories of Cork's Built Heritage (2013)

If the Walls Could Talk: Stories of Cork's Built Heritage (2013)