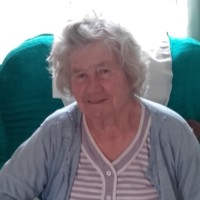 Mary begins the interview by talking through her earliest memories of Bantry, walking to school and robbing apples and nice and cross teachers. Mary’s then moves on to describe her family, and how she left school at 14, her father was a farm labourer and her mother died at 48 due to cancer. Mary then talks about childhood chores, shopping, baking, cleaning, pony and traps, growing vegetables, turkeys and herbal remedies, chickens, eggs, life pre-electricity. Mary’s mentions sister her staying at home and the loneliness of her father in his later years. She then also describes how she walked to school and fetched water from the river, heating cocoa by the fire, no electricity, Tilley lamps, homework, men playing cards, mother helping neighbours, and how her father did not work the month of February. Cycling to the dances, dances on the weekend, teenagers, music played, people who ran them, before that dances in the home.
Mary then describes life during World War Two and how rationing affected them. And strong memories of men returning from the war shellshocked. She then moves on to talk about her father and his love for gardening and helping neighbours. Mary also mentions the death of both her mother and sister to cancer. The second part of the interview relates to Mary’s moving to Cork city marrying into the trade and how being the wife and mother of stonemasons.

Mary's son Murty was also interviewed for the project.
CFP_SR00565_osullivan_2015;