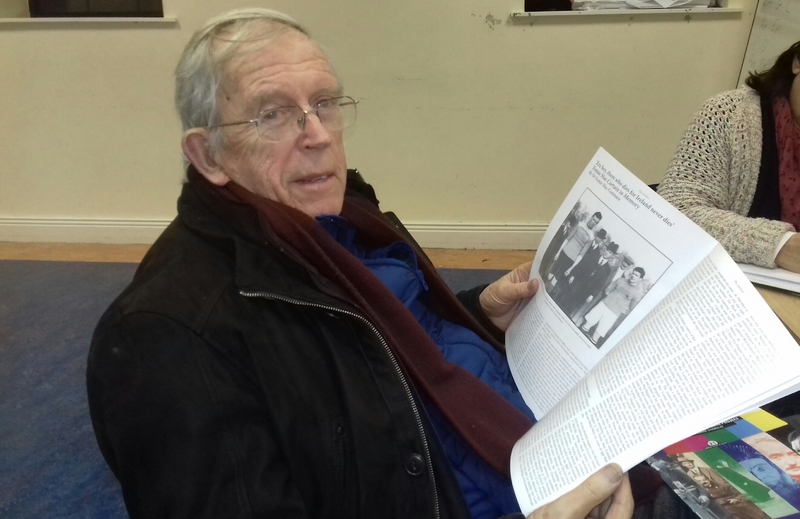 Pat Gunn grew up on Barrack Street. He talks of early life there plus his involvement with The Cork Shakespearean Company and of his knowing FR O Flynn in his final years plus the 1961 BBC film on The Loft. Also about his Fathers involvement in The Old IRA in War Of Independence and Civil War. Topics covered include his father's memories of the burning of Cork and Barrack Street ambush. His father's thoughts on the Civil War. Also his ancestor in The RIC. He also speaks of meeting Tom Barry in the 1960s. He speaks of witnessing the ceremony at Cork City Hall to celebrate Ireland becoming a republic in 1949.

This is the first of two interviews with Pat for The Cork Shakespearean Company (The Loft) collection. The second is CFP_SR00627_Gunn_2017

DMC.  After the death of Fr. O’Flynn, as we know, the loft continued on….

PG.    Well it did too because, at that time we still had the original founders like Gus Healy and Eileen Curran and, and others: Tom Vesey, Teddy Healy, Norry O’Brian, Norry,…..Norry Healy, sorry as and. Quite a number of others that, that,…..Jonny Gallaher, she was another woman that, who came into that as well and, and they, they were there with us as well. So they brought us along another step of the way, and Gus Healy was absolutely wonderful that he was able to bridge that gap because he knew Fr. O’Flynn from the time that the loft was founded in 1924, right up until he died and then came in and then took over the role of, of chairman. And was chairman up till the time he died in 1986. So we were lucky, and of course, Eileen Curran was Fr. O’Flynn's disciple and she had his interpretation. She knew the plays backwards. She could quote from any of the plays without ever looking at a book, you know. And we were lucky. And then, like, we were maturing ourselves. Pierce, of course, my brother, was that much ahead of me and he, he was well into it as well. And you had Pat Lehane and other stalwarts of that particular time. Now I would have to say then a lot of the others had drifted away, like the Michael Twomey’s and Marie Twomey’s weren’t as and…. those that were around at the time when I mentioned like the: Kevin Sheehan’s, the Michael Mcauliffe and all of these. They, Monn Murphy’s, they had moved on a bit. Now one or two of them, like Monn, came back and did a few parts with us at later stages, you know. I know Monn did a reprise of Hamlet in, I think the mid, the mid 60's, 1964. She came back and reprised her role as ‘Ophelia’, you know. And Tom Vesey, of course, a very old great old stalwart of the original cast. He, he was there up until he died I think 1966. So they, we were lucky, you know. But then we had matured enough to more or less bring it on ourselves and Pierce immersed himself, my brother that is, immersed himself in the work of Fr. O’Flynn and Eileen Curran. When Eileen Curran passed on in 1977. And we also had a, a, a, an outsider who's contributed hugely to the loft of the period and he was a man by the name of John Morley. And he came into the loft in the early 70's and he, he, he was quite an outstanding character. He was English, old English, retired actor living in Cork for a period and he, he was, he was a great man of theatre, you know. And he taught us a lot of things apart from…. the plays and producing and all that, you know. He taught us a lot about creating properties and you know, and settings and all that as well. And he was an extremely talented man and wonderful guy and he understood Fr. O’Flynn and where Fr. O’Flynn was coming, from the word go. He had in fact in Dublin been a friend of Fr. O’Flynn’s nephew, John O’Flynn. And when he came to Cork he, he, he, he was involved briefly I think with The Everyman Theatre. But then he came along to us. And he, he was with us for many happy years really up until….. 1977. He was producing at the time that Eileen died rather suddenly on us in the middle of the last few rehearsals for, for The Winter’s Tale in 1977. And she was; Susan Cummins was a very good girl at the time who, who filled in, in between, between the Saturday and the following Wednesday she, she filled in for him …and she took over the role that was vacated by Eileen Curran, which was quite a substantial role actually in that play. And she, she was to give a very credible performance but John Morley, he directed that. And I learnt a great deal from him because I played ‘Leontes’, the king, in that I had a major role for the first half of, of the play and he was great. But he eventually; he was a member of the high religion and he was asked to go over to Bermuda with his wife, Valery, who was a lovely lady as well. That was about the end of the period where we had come out of The Opera House. We went back into the opera house in the 70s and then did quite a number of plays in The Opera House. But eventually, the burden of, of, of mounting pro plays in the opera house became a bit heavy for us all because we were all young and married and working and that sort of thing. So we tended to go back into The Theatre of the South, a little theatre in Castle Street and then after that then, when they built the The Cork Arts Club then in Knapp’s square we gravitated to there. We kinda, generally speaking, do most of our plays there now at the, at the moment anyway, but. So, that was, we were helped an awful lot to be able to do that, you know. Now, and I'm glad to say that there’s a new generation coming on after us headed up by Ciaran O’Leary and others, and Ray Brothers and Mike O’Neill and hopefully they'll carry the organisation on further into, into the next number of years.

The Cork Shakespearean Company (The Loft)