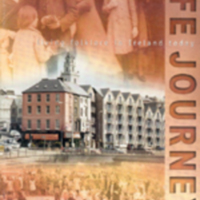 Tom is a poet from County Waterford, who describes what University College Cork (UCC) was like in the 1970s. He is an admirer of Fianna Fáil and he discusses the party’s politics. He talks about his work and about other poets.
Tom was born in Cappoquin, County Waterford in 1954. His mother’s family were heavily involved in Nationalist politics.
Cappoquin was contiguous with the Ring Gaeltacht and he spoke Irish to native speakers; a relative of his was recorded by RTE reciting poems in Irish and by a local folklorist. He came to UCC in 1972 and has been in Cork ever since.
He was involved with the Fianna Fáil party and wrote a novel based on the party’s history. He describes the party’s reading of Irish history. He talks about the political and social culture of UCC in the 1970s.
He was a poet, and after college he became a full-time writer.

TMcC: In 1972. And then I came up to UCC straight from the Leaving Cert. And that was really when I arrived in Cork in '72. So I've been in Cork for, what is that 27 years is it? Good God. Terrifying.

SH:      Was '72 with the Northern situation in a way, it was almost in the sense of em, you know actual military hostilities and the number of people engaged and riots and demonstrations was almost like, the peak of the troubles, of the modern phase of the troubles in one sense like it's become a lot more sophisticated perhaps, a lot of the military activity since then but it never really has reached a no-go areas and things like that. Was there a sort of feeling that this thing was just going to go on escalating or could go on escalating and possibly engulf the whole of Ireland somehow?

TMcC: Well you know, I suppose my own situation was peculiar in that really in 1972 at the age of eighteen I was really only interested in myself and my own poetry you know. Everything else that happened was a very distant second.

SH:      Was it quite a good feeling to be distant from something like that?

TMcC: Well, for me it was absolutely necessary because something terrible had happened. Em, when I was a young man, in fact, I was involved in the Fianna Fáil party which would see itself as mainly as the inheritor of old Sinn Féin, as the Republican party, very anti-Britsh, very anti-English and adamantly and furiously confident that Ulster would become part of Ireland, that the British administration of the six counties was only a temporary arrangement. Em, but you see I 1970 when I was sixteen the arms trial blew up in the face of the Fianna Fáil party and split it. So, em by 1972 when I was 18, really I was utterly and absolutely uncomfortable with the Fianna Fáil party. I suppose the kind of people I hung around with, people like John Freher and George Armstrong of Lismore and Ned Lonegan of Cappoquin and that, these kinds of people, they would have been in the PD wing of Fianna Fáil, the kind of Desmond O'Malley wing, not really the Republican wing you know? And so they were horrified by what had happened you know and believed a lot of the anti-Haughey propaganda of the time. And eh, so when I say I was only interested in my poetry and in myself it was probably a kind of survival mechanism as well, I didn't want to really have to deal with all these problems that arose for Fianna Fáil after the arms trial you know. I describe that time actually, and the year 1973 as well, in the novel I wrote 'Without Power'. It's very much sort a way of recapturing that time you know.