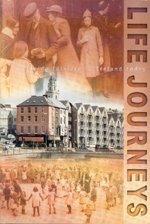 George was born in Slievenamon, Co. Tipperary in 1915. He served in as a commandant in the Irish army from 1935 to 1971. His parents married in 1895. George's father was a serviceman in the British army. Both George's father and eldest brother fought on the western front during the First World War. His brother was captured and held a prisoner of war until fighting ceased. On his return from the war, his brother joined the IRA's 3rd Tipperary battalions flying column and was heavily involved till the end of the Civil War.

George speaks of the societal and technological change that happened in his early life. How most people lived on credit and those who were subsistent farmer like his family had little to no social life. He mentions women performing physical tasks on the farmers due to not being able to afford male labourers.

George was in involved with the Local Defense force before joining the regular army in 1935. He speaks of the lead up to the second world war and how he did not see it coming. Once the war did begin he felt that the country pull together and he expresses that he thought 'it was our most united time as a nation'.
Georges goes on to speak of Ireland being Anti Soviet and that communism never taking hold here. He finishes by outlining his time spent in the Congo with the army.

S H:     Was Tshombe’s army quite a well-disciplined army by the standards of the place?

G G:    Tshombe’s army was mainly controlled by mercenaries and the mercenaries came from all over the world, mercenaries from New Zealand, Australia and South America. They were mercenaries proper, mad for a fight, to fight was their lifestyle, you know. We found that they were great, they were white number one. When I went into Luena and took it over, there were Congolese army just on the edge of town and there was a Belgian in charge of it. Jack -- can’t remember his name now, Jack something. But the first night that I was there, I went over into his camp, I rang him up first on the phone, on the army line and I said who I was and that we were here to do a job to stop killing and he said ‘that’s my policy too, in taking this place we killed only a half dozen in the place’. So I went over into his camp, sitting at the table and I said for a start off ‘I have no gun on me, no gun on me, have you?’, ‘I always carry a gun’ he says, you know. I said ‘I wouldn’t like to talk to you with the gun there’, so he took the gun and he said here you have it he says, so that changed that, it went pleasantly then, we had comfort there but if any bit of trouble started I went to him or he went to me.

G G:    A Congolese born Belgian, he was a gentleman, only a gentleman. No bother getting on with him, as I said they cleared that area now of the local Congolese tribe and kept the killing down to the minimum anyway. That was the rule.