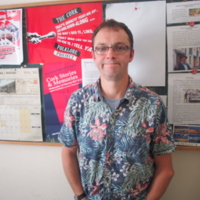 Tom is the author of several books on design history relating to Cork City such as “Cork City: A Field Guide To Its Street Furniture and “Layers”.

Tom speaks about how he was born in England and came to live in Cork aged seven when his father got a job in the Chemistry Department of UCC. About growing up in Rochestown Road in the late 1970’s and 1980’s. About the lack of facilities there, description of a tin shack shop ran by an elderly lady which is no longer there. Description of the River Lee and the Douglas Estuary. The disused Blackrock Railway line and the metal pedestrian bridge which at the time was semi derelict. About mullet that swam in the estuary and his fathers attempts to fish for them from the pedestrian bridge in the belief that they were sea bass. About early years in Cork growing up in a number of half finished housing estates in Bishopstown and Rochestown and his father using discarded building materials to build sheds etc. He speaks about his fathers work in Leeds and Sussex universities before they moved to Cork and he describes a period of his young childhood when his father got a job in Ahmadu Bello University which is located in Zaria in Northern Nigeria and the family moving there. Tom’s description of the mainly western enclave they lived in, of picking up some phrases of the local language Hausa and of a prank where himself and some other boys set fire to the bush.

He speaks of the difficulties he had in learning Irish in primary school in Cork and how in later years he came to appreciate the language and adds his thoughts on how the language is thought and its future.

Tom speaks about the relationship Cork City has with the river Lee. About the mainly working class anglers you would see fishing near the Shaky Bridge aka Daly’s Bridge. About canoeing and boating on the river. The history of river ferries on the River Lee and one that was still running up to the 1980’s bringing GAA fans across the river from the Ferryboat Inn on Lower Glanmire Road across to the Marina. On the proposed Cork City flood defence walls and his thoughts on it and alternative options and the Save Cork City movement. Of the negative relationship Cork City has with the River Lee and comparisons with that of other cities. He speaks of the Cork Main Drainage project and how it has improved water quality in the City. About how sewage and effluent from farming would flow into the river. Of the killer whales that entered Cork Harbour and swam up the River Lee in 2001. He speaks about the group Meitheal Mara who sail currachs on the river Lee. He talks about the O Flynn brothers who were the last of the traditional salmon fishermen in the Lee and how their boats could be seen on the quayside by the Trinity Bridge.

He speaks of the Cork Exhibition of 1902/03 and water based attractions such as the giant waterslide which was located on the riverside by Fitzgerald’s Park. About the huge rowing regatta which attracted record crowds and the general growth in popularity of water based activity during the Edwardian era.

Other Interviews with Tom Spalding:

KM: I suppose we've talked a lot about the river and the urban setting. Do you have any experience or knowledge of the rest of the river and it's source?

TS: I used to canoe quite a lot on the Lee, twenty odd years ago. Myself and a friend from work after work, we'd take my canoe and we'd pick a bit of the river and we'd canoe it from the weir above the bridge near the Ballincollig regional park, Inniscara, near the Inniscara Bar or whatever it's called. We'd canoe that area between those two weirs. We canoed from Ballincollig down to the city. We canoed on the lake in Inniscara, the resevoir. One time I canoed from, and it's not the Lee, but I canoed from Bandon to Kinsale on the Bandon river. And you get a totally different view of the journey. Sometimes the river runs close to the road and it's noisy and loud, and then you go around a bend, you go a hundred yards from the road you hear the birds singing, you see the kingfishers and stuff. You're in a different country really. If you canoe down the Lee from the Anglers Rest into town there's a point at which you see the County Hall. And it's just sticking out of the trees. You can't see any other buildings, you just see the County Hall and it's staggering, just shimmering there in the sunshine. You know then as you get close you start seeing the old mental hospital and waterworks and other parts of the city. It's a great way of coming into Cork, by far the nicest way to enter Cork is by river from the west. The problem in terms of canoeing is the river is actually pretty shallow there and a lot of the time you're walking, carrying the bloody canoe. Especially in the summer time, spots might only be four or five inches deep, rippling over the stones. So unless you find a perfect path through. We capsized plenty of times as well. But by the time you're kind of down the Straight Road, that area, it's a different river. It's very gentle and deep, it's great. But the Kingfishers are just amazing, amazing things to see.

KM: What is it about them?

TS: They seem much bigger than they really are. They're only about the size of a robin, so they're eight or nine centimetres long. But because they're electric blue and they move so quickly, they appear to be the size of a crow or something. You see this bluey orange dart. They can be sitting on a branch for god knows how long and you never spot them, even though they are bright blue. But when they move you just see this bullet of iradescent blue. You don't forget it, it's just really nice. So that'll be my experience, swiming at the Angler's Rest when I was a kid and canoeing up and down. At the time anyway, the river near Ballincollig was pretty stinky. I'm still not sure whether Ballincollig has anymore than primary sewage treatment. As far as I know that's taking the lumps out with a big net. I think they take the lumps out and apart from that it just goes straight in the river. And when you go through Ballincollig there's a definite kind of cloudiness to the water and a smell. And that would kind of put you off. But you go further down and it gets a bit diluted so it's not so bad, but just especially in the Ballincollig area it used to be really stinky.

TS: No. I'm quite confident, probably overconfident on the water. We had lifejackets. If you capsize often enough in a canoe you'd kind of know what's coming next. You get to 'Here we go. Don't let go of the paddle.' That's the golden rule and then you're snookered. You can't make yourself go anywhere.