The loss of Teddie and Charlie O’Shea of College Road

Objects can survive down through the generations in family homes that open up a window on the experiences of other families. When cleaning out the family home in Cork City, Jim Morrish came across a large number of memorial cards that had been kept by previous generations, tucked away in books, bibles, hymn books, purses and drawers. He shared one of these cards on a Cork City Facebook group in February 2021, wondering if the young men pictured had died of Spanish Flu. 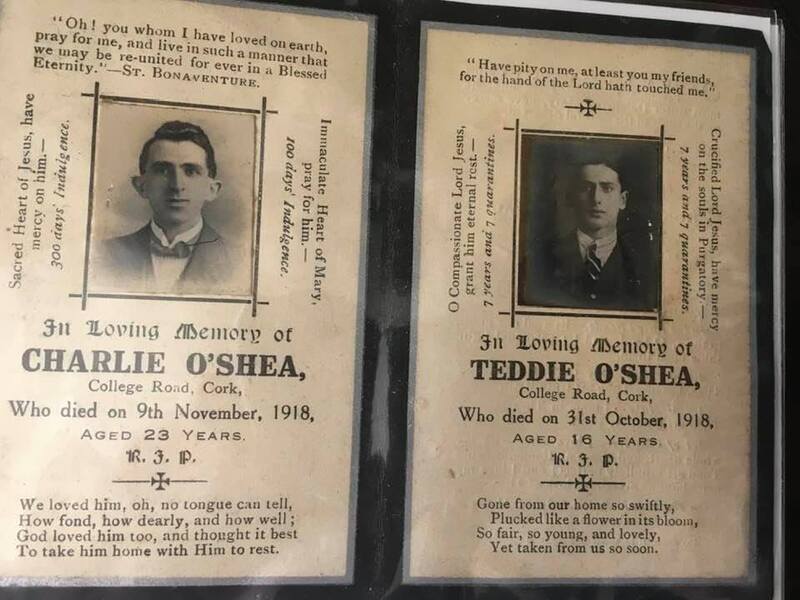 The memorial card, pictured here courtesy of Jim, was a double card picturing two brothers, Teddie and Charlie O’Shea, from College Road, Cork. Teddie had died on 31 October, 1918, aged 16, and Charlie less than two weeks later, on 9 November, 1918, aged 24. A search of the death registry shows the deaths of Timothy Thomas and Patrick Charles O’Shea, both listed as ‘Child of Police Pensioner’. The ‘Certified Cause of Death and Duration of Illness’ for Teddie was ‘Double Pneumonia 10 Days Certified’, and for Charlie it was ‘Double Pneumonia 2 Days Certified’.1

On the day of Jim’s Facebook post, the two men’s nephew Pat O’Shea and grandniece Sasha O’Shea commented on the thread. They were able to fill the group in on the background. ‘We were told they survived the war but the Spanish flu killed them. It was a very sad time in the home on College road.’

Charlie and Teddie O’Shea’s parents had been very friendly with Jim’s grandmother and grandfather, and that is how the card had come into his family.

Thanks to Pat and Sasha O’Shea and Jim Morrish.

[1] Although in Charlie’s ‘Form to be used for making out Occasional Copies of Entries of Deaths for transmission to the Registrar-General’, 2 days is crossed out and the figure 6 is inserted. https://civilrecords.irishgenealogy.ie/churchrecords/images/deaths_returns/deaths_1918/05166/4425031a.pdf