'Just when you thought it couldn't get worse, it did'

Pauline Matthews was born in the mid 21st century in the Ballinttemple area of Cork city. When she was an infant her mother contracted tuberculosis and was confined to the chest hospital in Mallow. Shortly afterwards Pauline too contracted the disease leading her to be hospitalised in St Raphel's Montenotte. Pauline's father was in the merchant navy, and was away for long periods of time. After an accident at sea, he too was hospitalised, in Australia. The loss of his income meant that Pauline's aunt had not only to be the sole visitor to her sister and niece in hospital, but also to hold down a job to provide for her three relatives.

born in the house of her mother and aunt – father working in merchant navy – mother got TB shortly after birth– sent to Mallow chest hospital, then Heatherside – my aunt was left holding the baby – worked in the Green Door restaurant – ‘I don’t know how she managed’ – misery going to Mallow on freezing bus on her day off – TB was very socially unacceptable – nobody wanted anything to do with you if you had TB in the family – father got home occasionally – I got TB when I was about 6 months old – St Raphael’s in Montenotte – mother’s lung removed by Dr Maurice Hickey – Dr Noel Browne’s initiatives – advent of streptomycin – thankfully, eventually my mother recovered – I recovered also – father in an accident in South Australia – my aunt tells the story of the Southern Health Board officials wanting to burn all our possessions – complete lack of sympathy or support – in time things got better.

Full interview of the impact of tuberculosis on a Cork Family

Access the catalogue entry to Michael and Teresa O'Sullivan. The entry includes images, an audio excerpt and a full interview log and summary. 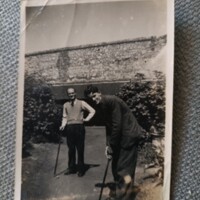 Michael and Theresa are husband and wife and live on Fairhill on the north side of Cork city. Michael is 87 years old and Theresa is 85 years old. In…

TB is a potentially serious infectious disease caused by the bacteria Mycobacterium tuberculosis. It currently affects over 2 billion people worldwide, with over 10 million new cases per year. An amazing 1/3 of the world's population are carriers of the disease (this is referred to as latent TB). This disease, also referred to as consumption and the ‘white plague’, has always had a very high mortality rate associated with it and a huge impact on global populations. It is thought that this bacterium has been around for 3 million years. Indeed, TB was found in the remains of a mother and child buried together dated to 9,000 years ago.1

The bacteria that cause tuberculosis are spread from one person to another through tiny droplets released into the air via coughs and sneezes. Its primary site of infection in the body is the lung. There are two distinct types of TB infection – latent and active. People with latent TB infection have the bacteria in their body but is in a “quiet” or contained state. That means that it is being controlled by the immune system and is not making people sick. However, it can re-activate, make people sick and spread. There are about 2 billion people worldwide with latent TB. Inactive TB, the bacterium is making more of itself (replicating), spreading through the body and to other people. In this stage of the disease people have a persistent cough, cough up blood, lose weight and have chest pains.

From 1880 onwards, an increasing understanding of the infectious cause of TB and how it spread resulted in the ‘sanatorium movement’. Whilst there was a belief that high altitude and fresh air would help to cure the disease, in reality this ‘treatment’ was primarily effective in containing the spread of the disease. The major breakthrough in treatment of TB came with advances in the field of antibiotic usage in the 1950s and 1960s. In addition, The Bacillus Calmette-Guérin (BCG) vaccine, administered in many countries from the 1950s onwards, provided some protection against tuberculosis (TB). The vaccine provides good protection against certain forms of TB but is poorer at protecting against the lung conditions associated with TB. Also, while BCG immunization provides fairly effective protection for infants and young children, its efficacy in adults is variable. As a result the BCG vaccine is now only routinely offered to children in areas of high TB prevalence.

Tuberculosis used to be very common in Ireland. In the late nineteenth century tuberculosis was endemic in Ireland, and was responsible for more deaths than any other single cause. By the early 1950s, there were still nearly 7,000 cases a year, with almost 10,000 people dying from TB between 1950 and 1960. The incidence of TB has declined steadily since then. In Ireland there were 321 cases of TB notified in 2017. The major current public health concern for TB is the emergence of antibiotic-resistant strains of the bacteria.