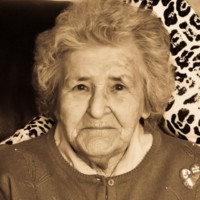 Margaret Newman [born 1922] talks at length about the shawls women wore, where they were bought, the types of shawl, and their uses.
She talks about the Bandon railway line, which was so slow you could lean out of the windows and pick blackberries. She remembers ice cream shops and Sweet Land.
Margaret mentions the location of the old fever hospital.
She also explains that Gurranabraher referred to as ‘red city’ due to red roof tiles. And the relocation of residents from Southside lanes to Gurranabraher. Margaret speaks in detail about life in the lane ways and the usefulness of the half door.

M N:  Over the weekend now I was thinking about all the shawls an as a young one I can remember most of the women a lot of the women that wore shawls Sunday was a special that they have there coat an there hat going to mass. But Cash’s Brown Thomas as it is known now was Cash’s an that was mostly the place where women went to buy shawls, but I can remember my mother eh when she was going in there I was a young one at the time an she took me in an she was going in with my Aunt. Now my aunt never wore a shawl she always had her hat and coat and em she went they went in an as far as I can recollect there was three types of shawls. Now the shawl was a square but you would have kind of make it three corners your self then like to so that you put two in an then one out you know it use to hang down at the back like a V shape. So em I always remember my Mother went in and ‘twas a double-decker she asked for. An when my aunt asked her what eh cape she said a double-decker that’s right she said because there is a finer one there than but I want to get the good one because there’s kind of tassels at the ends of it. An then there was paisley shawls an ‘twas mostly the travellers wore them. They were a kind oof a fawny colour but there was a design on em as well at the end. The one thing that always puzzled me was the, the, the em the people that had the stalls in the Old Cornmarket Street the Coal Quay now as we know it. Look here now we’re going to loose or eh there able to look in into our room now.

M N: A we’ll have to do something about that now that’s corporation property do you understand. We own the, the, I own the ground now like that the house is built on, but the young one came up there yesterday sorry now about this

M N: But anyway I'm going off what I wanted to say to you. I was always fascinated by the old women that used to be down in the Coal Quay as we knew it em they’d have the shawls but they’d have the shawls crossed over in the front and they’d bring the ends of the shawls to the back and tie them in the back so as their hands was free. But it ‘twas for there chest then as well if the weather was anyway cold so it was crossed over on there chest an the two ends then were going to there back and they were tying at the back. Do you understand and then they might if they might have their purse then as well inside there like because ‘twas my most of them had their shawls tied behind there back.

G MC G: An these were working on the market?

M N: These were people on the Coal Quay