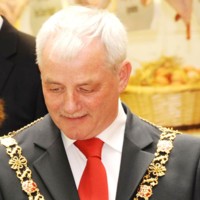 Michael was born in the 1950s and grew up in Farranferris Ave below the Church of the Redemption in Farranree. He came from a family of 13 children. He was a student at the North Mon. His mother was a great GAA fan and a sporting person who played camogie. She was an extraordinary woman who managed to raise her children with very little money. His father was a quiet, intelligent man who worked on the building line and on the docks and was interested in politics. He met his wife Catherine and they married in 1972. He worked at Blarney Woollen Mills and then B&I on the Inisfallen for 17 years and became interested in local politics in 1973. He was Deputy Lord Mayor in 1976 and Lord Mayor of Cork from 2010 to 2011.

Michael remembers his community as a fantastic place to live with an amazing sense of community. He recalls the opening of The Church of the Redemption in 1958 as a huge event with Cardinal Cushing and Bishop Lucey. He speaks about the completion of Farranree, Gurranabraher, Churchfield and Mayfield estates in the 1950s.

He fondly remembers a well known local character Andy Gaw who used to collect money to give to the local children. He mentions the games they played such as slogging apples, catching birds like redpoles and finches and hiking in Rosses Wood.

He talks humorously about the first live television they saw through a neighbour’s window.

His visits to Maddens and Cissy O'Connell's shop on Bridge Street, and going to the pawn shop on Shandon Street and Gillabbey Street for the Sunday suit.

Michael talks about how difficult it was to feed a family of thirteen and the food they ate to survive. The use of allotments to grow vegetables.

He tells a story about getting plaster of Paris removed at the North Infirmary.

Going to the cinema in the Lido. ‘Jagging’ and going for walks with girls.

How Cork has changed economically and its impact on industry and young people.

He welcomed Queen Elizabeth II to Cork in May 2010 and talks at length about the logistics of the visit.

MO’C: I was thirteen. And like that, I mean to say a lot of people myself we left school for one reason like to try and go out and get a job, to try and support our families because I was the third eldest in my family so they were people that were out working and bringing home a few bob, you know made a huge difference to the house and my two elder sisters were working before, you know. But I remember we got this. ‘twas like that when you thought about it, ‘twas who you know like even back then like, my two friends were working out in Blarney Woollen Mills so we got the job in Blarney Woollen Mills anyway. There’s em so ‘twas on pounds ten a week, one pounds ten.

MO’C: I worked and we made stockings in the hosiery department. Stockings. Woolly stockings now, not that time, we made woolly stockings that time, they made yarn as well then over in the other place. But I was in the place where they made the stockings but ‘twas one pounds ten, I remember if you worked on Saturday morning, half eight, to I think it was twelve o’clock you got three and six for that then. Serious money now like but the big attraction of the whole thing right, the big attraction was right you got a free pass for the bus, from the Sunbeam.

MO’C: You get the Blarney bus. They gave you the pass, they gave you the pass with the bus to go out to Blarney. So we were out there, out there for a good few months anyway and this fellow, this fellow [phrase unintelligible] they’re looking for somebody up in laundries, up in the Mallow Road, so I had to go for the interview wherever anyway, I got the job anyway three pounds fifteen shillings a week, I was like a millionaire. I couldn’t believe it, couldn’t believe it the amount of money I had but eh stayed up there then for awhile and I went to England. I was in England. I worked in England.