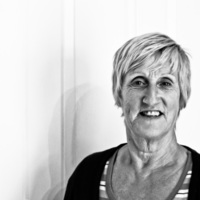 Noreen grew up during the 1950s in Nicholas Church Place, off Cove Street. She says the house was a tenement house shared with a family who lived upstairs. She went to the South Presentation Convent School. Her father died when she was 10. She left school at 14 and worked for 11 years at the Cork Shoe Company until she got married.
She remembers some of the shops in the area of Nicholas Street and Barrack Street. In one of them, a short-sighted old lady kept her money on the counter and used to have money stolen. There were a milk and cake shop, Ciste Milis. She talks in detail about the games she played as a child, including playing house. Girls could make dolls out of the newspaper; they would get remnants of material to clothe them. They also tied ropes high on street poles and swung on them. Indoors, they collected cuttings from newspapers and books and made scrapbooks. An outside ball game had a simple chant, which she quotes. Christmas presents were often modest, but the excitement was high.
Her mother used to tell ghost stories to the local children, and Noreen remembers a story about a dead girl’s golden leg and a telling of the Babes in the Wood story.
She and her siblings were washed in a big tub in front of the fire, while her mother cooked bacon and pigs’ feet (crubeens).
She recalls the use of the pawn shops and her being afraid to be seen coming out of a pawnshop by her schoolmates.
She talks about local character Andy Gaw.
She remembers using the outside and indoor public baths, with swimming wear that was just regular underclothes, and running home by St Fin Barre’s cathedral, afraid of two stone angels whose trumpeting was said to herald the end of the world.
She recalls the Polo [Polar] Ice Cream Company, and the huge ice cream wafers she could buy.
In the Summer the family would go to Crosshaven or Youghal for inexpensive holidays. Personal entertainment could be had to pick blackberries, going picnicking with jam sandwiches, or going to the cinema. She tells how the pennies to go to the cinema were found by sweeping the floor or looking under a rock.
After her father died, her mother went to work for a Jewish family, the Rosses. She describes her mother’s working life and way of raising the family. She lists the different meals eaten during the week.
She remembers her grandmother visiting and singing Hey Diddle Diddle. At family gatherings, people would sing Alice Benbow [Sweet Alice Benbow, a.k.a Alice Benbolt] and other songs, of which she remembers the odd line.
Her older sister would go to the cinema and then tell the other children in the family the stories of the films she had seen.
She talks about moving to Ballyvolane after she got married, the community there and how Cork city has changed. She mentions going on holidays to Galway; sending the baggage up by train and hitching lifts up there. She used to go to dances in Cork and walk home safely early in the morning.


Note; This interview was conducted as part of the Cork 2005 Project


F.Q: Would they be boys and girls playing?

N.H: Boys and girls, yeah, but you'd be all embarrassed then if your mother saw you being caught by a boy, you know, he'd bring you back to the den, and your mother would be at the door, and you'd be given out to, you'd be caught by the elbow in case you'd run away, and you'd be all embarrassed with the boys being around, em, that would be that game. And getting back to games of the house now, sure like our bedrooms then you'd get cardboard box for the dolls, we nearly all had a doll, and we'd get a toy for Christmas, so like during the Summer the doll would be broken, we'd make a paper doll, with newspaper, I often made a doll, a foot long with newspaper, and if you got brown paper it was a great novelty, because you could draw a face with the brown paper, whereas with the newspaper you could not make a face, you draw a face on the doll, and then there was a woman living near us who was a dress maker, and we’d knock at her, and we used to have her scourged, for old rags and bits of trimmings off off the things that she’d have, and you’d make clothes for the doll, then: scarves for the dolls, and we’d dress her up, and cardboard box then, and if you got enough stuff then you could make a little pillow and a little cover for it, and you’d be there for all hours of the morning, playing away, for all the kids in the area like, that was some of the games, and then you had the usual games I suppose, you’d have the game of picky, where you’d be, someone would get chalk then, and we used to get ropes and the street poles in the street, and you’d put them up the pole, you’d tie it, but like someone would like say there’s a man here along, and you’d say hey sir, lift up the rope for me please (the usual old slang) and the man would kind of sling it up, and he’d get up real high like and he’d pull it high tight in a noose, and then you’d have for hours, then like one would be on one side of the street, and the other side, you might have to stop maybe every hour and a half because a car would pass, that’s how little cars were on the road like, and eh, that would be kind of summery games, then and winter games then I suppose skipping, or release, jumping the steps, where we were living there were steps like; once I jumped the whole ten steps. . .