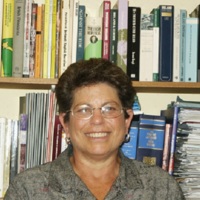 Liz was born into an upper middle class, liberal, Jewish family in 1948 in a suburb of New Jersey, USA. She has one brother and one sister. Her maternal grandparents lived close and were part of their family life. Her father commuted daily to New York City for work. Her grandparents were all immigrants into the States. Liz went to Vassar College, then a private women’s college in New York state. She and her husband came to Ireland in the 1970’s.

She played a range of childhood games in her neighbourhood particularly a game called ‘swamp fox’ which involved playing in sewerage overflow.

There is a good story about her grandmother who was a ‘flapper’ and party girl in the twenties and how they were all into show music, especially George Gershwin and Cole Porter. Divorce was unusual and difficult in the 1930s. Her grandmother had to travel to Nevada to get a ‘quickie’ divorce. She was a character.

As a family they didn’t keep kosher, but were aware as children that their tradition and heritage was Jewish. Their diet contained some Jewish food like brisket, pickled herrings and matzos.

Discusses how her parents started a reformed Jewish (non-Orthodox???) synagogue in a space shared by the Presbyterian church. They went there for Jewish New Year, Rosh Hashana, Yom Kippur and Hanukkah. Ethnic grouping was very important and socialising happened within your group. Liz was the only family member who was interested in observing Jewish religious holidays.

Originally Liz and her husband came to Dublin in 1974 through a university research fellowship. They came to Cork in 1977 when her husband got a job at Crawford Art Gallery she just says “the Crawford” so she could mean the school??.

They loved Ireland and were happy to be outside of the US because of their anti Vietnam war views. Their first impressions of Cork were of how grim it was and that there were lots of derelict buildings. Merchant’s Quay, for example, was all boarded up.

Liz gives a very humorous account of giving birth to her daughter Charlotte in St Finbarrs and how religious the hospital was. There were lots of holy pictures and crucifixes. How they closed off her bed with a curtain when mass was said in the ward.

There is a lot of good description about The English market and her Saturday morning ritual of going there to shop.

Liz discusses the dwindling of the Jewish community in Cork and the closure of the orthodox synagogue for Jewish New Year because there aren’t enough people to open it. How traditional the rules are that insist on women sitting up stairs.

Liz discusses the role of women in the synagogue and the differences between the Cork Orthodox community and the more liberal experience of her childhood.

F.Q: Coming back to Cork, em had you any kind of funny things em happen when you arrived first, you know misunderstandings or?

L.S.S: Em not, the only thing I remember was when I was in hospital having Charlotte my daughter in Finbarr’s, em the first time I was in hospital I was having a threatened miscarriage you know at twelve weeks, and I had to spend five, six days on a ward, and I do remember the whole religious thing hit me because nobody at that point you know when you go into a hospital the first thing they ask you after your name and address is your religion, and I kind of had a hard time getting my head around that, so I took a big deep breath and said I was Jewish, and the woman kind of looked at me strange. Then when I was on the ward I was in the middle bed of one side, so they were you know six bedded ward, and I was in the middle, and on Sunday morning they came and they curtained me off, and I thought what’s going on here, and you’d be scared back then because I was afraid that I was going to have a miscarriage, and em plus I was older than most people – I was thirty when I had my daughter so I was nervous, and they come in and they put all the curtains around me, and I say to the nurse what’s going on, and then they set up an altar at the end of the ward, and they obviously were going to serve Mass on a Sunday morning. And she said, and I said is there something wrong with me, is there a problem, is the doctor coming, is there something wrong; oh no she said, no, no, no, no, we’re just going to have Mass, and I said so why are you curtaining me off, oh we wouldn’t think it would be right for you to watch! And I remember thinking that was strange. And then the women on the ward, who were lovely, they were lovely women – we had such a good time together actually, except for the ones who were sad who might have had a miscarriage. But they were all passing around Holy Cards, and of course I thought this was hilarious, and they were passing me over, you know, would you like this one, or would you like this one, and sticking them into their bras and that kind of stuff you know; and I thought you know again that was very strange and funny. And then finally when I had Charlotte then, Thank God I didn’t have the miscarriage and I had her, but she was a very premature baby, and she was in the Special Care Unit in Finbarr’s em and a woman, so she wasn’t on the bed next to me, and a woman stopped me in the corridor one day, and I had her in August, and I was up on a farm before that so I was sitting out and I’m dark skinned anyway and I’d gone very tanned from the summer, so this woman stopped me on the ward, and she said oh you’re the one who had the miracle baby! And I said what do you mean the miracle baby? She was very premature, she was under four pounds, but she’s fine! And she said, no, no, no, you’re the black woman who had the white baby. (Laughs). Which amused me.