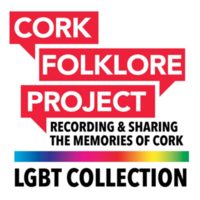 Stories and memories of LGBT life in Cork City and County.

D C And could you tell me a bit what like drag, how would you define drag like?

E K How would I define drag? Well, I think drag has changed over the years, drag has gone from very straight up guy in a frock lip-synching to more performance art, to now it has evolved so much over the years. Now there is drag where people don’t even consider it drag, because it is just what people look like or decide what they want to wear or you know, you know drag is a kind of a funny one really you know because, again it all depends on what you, what you consider drag and the era of the drag artist.

E K You know, that they take on. So I mean, you know you have guys with beards these days who just wear makeup and that is considered drag, you know, you have, [pause] then you have got your Drag Kings, which I guess has been happening for quite a long time, where you have women who dress as men or you know women who have facial hair and call themselves Drag Kings. And so like I think, drag to me is fun it is not to be taken seriously and it is that’s what I think drag would be and it is about expressing yourself really I guess and kind of unleashing a side to you that you might never get a chance to do unless your that other alter ego I suppose, you know?

D C So do you think it kind of had an impact on Cork and influenced people?

E K I think that most definitely, I think that I found with Alternative Miss Cork at the start when we just started it off it was mainly just gay, do you know what I mean, it was just gay people you know, who came to the show and then the second year you could see gay peoples friends coming along. Then the third year you could see just gangs of straight people coming in because they have heard, they heard it was such a good laugh and so different, and then again you know, you saw even with the last Alternative Miss Cork we ever did, like you know over the years we went from doing small venues, to, to, to packing out the Savoy where you have got like eleven hundred people coming to this Drag show do you know what I mean, competition, drag, this, this drag competition you know, and I mean [pause] there was just like, it was actually half straight and half gay by the end of it you know. You had couples coming in, one of the shows we did was on Valentines night I think like there was an awful lot of straight couples went to it because they were just so bored of like going sitting in a restaurant with a candle between them, you know, it kind of gave people something else people to do. But I think it definitely influenced Cork I think it opened up a lot of peoples minds to diversity and to people’s sexuality as well and I think it also helped the gay scene to unite a bit because and create a bit of competition but it kind of pulled a lot of people out of the woodwork who wouldn’t necessarily be on the gay scene all the time and I think there was a lot of friends made from Alternative Miss Cork, and I think in general it was really good for the, for the, the, the Gay scene and [pause] the entire city.